Have you ever eaten from a diamond-encrusted tiffin box?

I bet you haven’t. But people in India have made it possible.

A golden feast was enjoyed by two men in Indian but the price they paid might probably not be worth it. A tiffin box made of gold, encrusted with diamonds and embellished with rubies; a box so stunning that all you want to do is stare at it. These two lucky men (maybe not so lucky now) decided to eat from it. 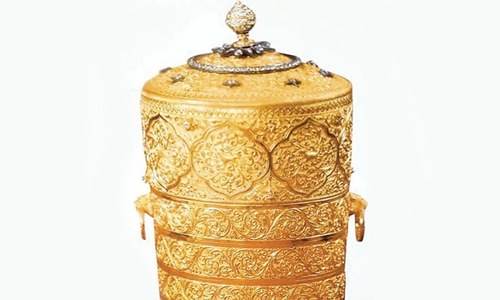 Strange news is no stranger to India. Sometimes, a goat is arrested for eating a judge’s garden, or a man shoots a waiter as he to eat leftovers or expelling students who rooted for Pakistan, and the list will go on and on. Another such news has surfaced again, where two boys stole a VERY expensive tiffin box, made out of gold and encrusted with diamond and rubies, only to eat out of it.

Mubeen Muhammad and Mohammad Ghouse Pasha hit the jackpot by stealing the Hyderabad Nizam’s tiffin box and then they decided to have a potluck party.

Masterminds of the high profile case of Nizam Museum, Hyderabad, Mubeen, and Ghouse bought packaged food and emptied it in the Royal Tiffin. They ate out of the diamond-encrusted tiffin before they hid it close to a dairy farm.

On the 2nd of September 2018, unknown persons broke into the Nizam Museum located Purani Haveli, where they stole several valuables including the famous three-tier gold tiffin box which belonged to Nizam VII Mir Osman Alli Khan. Since then, the local law enforcing agencies were in pursuit of the culprits.

Read Also >>  Why Blogging Is Crucial for Your Local SEO Strategy?

Forty days preceding the event, the thieves visited the museum to recce it. They made notes on the staff, the cameras installed and the valuable items available.  When they came to pull the heist, they entered by breaking the vent. After the heist, the fled to Bombay, more commonly called Mumbai, where they tried to sell the stolen items. After failing to find a buyer in Mumbai, they came back to Hyderabad, where the police arrested them. The thieves were not even aware of the value of what they had stolen, if not recovered on time, the items would have been melted! They didn’t just steal the tiffin box, they stole two cups and saucer and a golden spoon too. All of these items belonged to Nizam Mir Osman Ali Khan.

The duo, Mubeen who is 24 and Ghouse who is 23, savored the meal and felt like monarchs after eating from the expensive tiffin box. But their life as pseudo Kings was short lived as the law enforcing agencies cracked the Nizam Museum theft case and arrested both the culprits.

Anjani Kumar, the Hyderabad commissioner of police, said at a press conference that the duo has admitted eating from the golden tiffin box twice since they stole it, and later hid it carefully in a pit near a dairy farm in Rajendra Nagar, India.

The police recovered all the stolen artifacts successfully.