PUBG is the most famous and popular Multiplayer Online Battle Arena(MOBA) game which is available as of now over the play store.

PUBG stands for the Player Unknown Battlegrounds which merely means unknown players fight in a battle in a royal mode. The player can either fight in a group or as a solo member as well with the winner being the last person alive.

The main success of the game which led to the development of many other battle royal games one popularly being the Fortnite. The game is available at free of cost on the Google Play store and on the App Store. 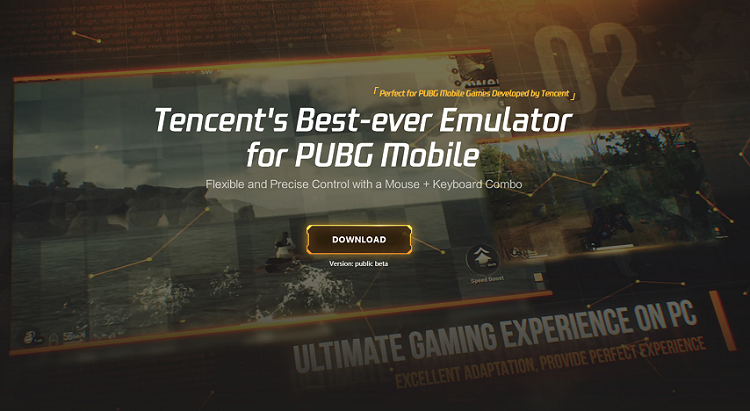 Tencent Gaming Buddy is one of the best PUBG Mobile Emulator for the PC/laptop users to play the PUBG game with no lagging and issues. The game will work perfectly on the Tencent Gaming Buddy with the keyboard and mouse controls or you can choose from a wide range of layouts which is available. There is also an option to switch from the keyboard to mouse control easily.

Tencent helps you to play the PUBG on the Laptop/PC with control optimized to improve the game. After the installation of this emulator, then depending upon the type of display you have, you can switch between the High Definition, Full High Definition and the Ultra High Definition resolutions and hardware configurations to play with for a smooth gaming experience.

The controls of the game in the Tencent Gaming is just like that of the other native games, all you need to do is to click on the mouse to attack the opponents or simply just need to move the pointer to rotate the character according to your choice. Moreover, there is also a full-screen mode which is available to give you enough room to easily find and kill the opponents so that you can earn the battle and Win chicken dinner!

Bluestack, which is also one of the most popular and used Android emulator with millions of users across the globe. This emulator runs almost all the Android games on the PC/laptop or any other gadget. This tool provides the best quality and is a reliable service.

This emulator is available for free and as well as for paid version for the PUBG game and it’s alternative like mini militia and many. With the help of a paid version, it will run the PUBG game effectively and smoothly and also increase the accuracy so that in the game you will never left behind with any of the opponents.

Apart from just this game, you can download many of the Android games/apps and the installed APK files. So to experience PUBG on your PC without any issue use Bluestack.

The emulators also come up with support for the screenshot tool, full-screen mode, screen record, a handy “kill process” tool, and some other features. It enables the installation of the APK files from the play store. It is also the best emulator for the best gaming experience.

This is an emulator which is famous among the gamers, and you must have surely heard about this before as well. The older version of this emulator does not support much of the functionality and the wide range of apps/games. But just after the release of the new version 6, this emulator has left behind many of the emulators back. In this emulator, even the macros work in the best way. With the help of this emulator, you can also automate the working and playing of a PUBG game to a high level of gaming.

The new version of the Nox Player 6.0+ supports the PUBG game which is much more different from the other emulator. There is also an option for easy customizations and settings for smooth playing of the game. To experience the best, PUBG on PC/laptop use Nox emulator from this link.

This emulator comes with an intuitive and rapid user interface, which is the best feature to sync up the application to the PC/laptop from a smartphone device, which is going to be used as a remote version. This emulator, simply sync your Google Play Games account with the cloud so that your gaming progress will never be lost. This option makes this emulator easy and unique to use because many of us always play the game with respect to the time-independent and machine independent.